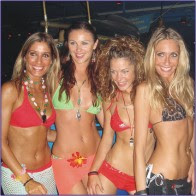 Fed up of the British summer? Me too, and that’s why stags dos have a better chance of some fun in the sun with packages to easily accessible destinations like Spain, the Algarve and even Bulgaria.

Currently the temperatures are pretty hot, hot, hot and so are the deals, with Spain offering the most choice of resorts, all catering to the stag night crowd. The TV comedy of the same name has boosted the popularity of Benidorm, which remains a firm stag weekend favourite and no wonder;

There is plenty to do in and around the resort including water and theme parks, jeep safaris, catamaraning, paintballing the beaches and of course an abundance of wicked bars and clubs.

To maintain your staying power, Brits can feel at home with the old fry up and fast food, but there’s no shortage of hip restaurants with all sorts of world cuisine. For a more rambunctious dining experience let your stag night partake of the medieval banquet, or combine dinner with a lucky night at the casino. If you hit the jackpot you might even make your stag do pay for itself.

Footie fans will love a stag do in Barcelona, where we offer a tour of the spectacular Nou Camp Stadium, and we throw in a visit to the FC Museum steeped in history and memorabilia of the club, plus the Art Gallery with its priceless Futbalart collection.

Salou, between Barcelona and Valencia, may not be on your radar, but it certainly is on the stag do map. With its mega theme park, Port Aventura, and a huge host of other activities within easy reach of the resort, this less obvious location is the ideal stag night destination with a twist.

Widely known as the party capital of Spain, and of course for its Grand Prix, Valencia’s cosmopolitan style adds an edge to the regular stag do, taking it just that cut above for the more prestigious stag weekend. And talking of a cut above, as we move on to Portugal’s southern coast, the dramatic Algarve cliffs tops of Albufeira will greet you in spectacular style. Add to that some uber exciting activities like deep sea fishing, where you’ll see fearsome Hammerhead, Blue and Mako sharks as well as Swordfish and massive Tuna, and you’ll be dining out on your stories for years to come.

Bulgaria’s capital Sophia is not only packed with, fun, fun, fun but it’s incredibly cheap, cheap, cheap – an essential ingredient for a successful stag do.

The DesignaVenture packages more than often include airport transfers, meals and accommodation as well as activities, but we can arrange flights too to give you a completely hassle free deal all boxed up. Make this summer really count with at least one sunny stag do memory.