Nothing Normal About A Stag Do In Reading 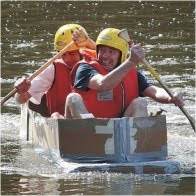 We’ve known for a while that most stag dos just aren’t normal, so DesignaVenture has created some stag do activity combos to accommodate you mentalists in outrageous style.

Let’s start with the water sports. We know you’re all big kids when it comes to the wet stuff and this time DesignaVenture are pulling the plug on anything standard to bring you Bath-tubs, Boats and Bananas package.

To kick off, the boat isn’t a traditional boat. Think of this more as a Scrap Heap Challenge moment, as you’ll be building your own vessel and attempting to race it to the finish. No engineering skills required though, as this craft will be made of cardboard (yes, we know, but it is special cardboard), plastic and the like and then you’ll paddle like fury before you get that sinking feeling.

Fortunately the inflatable banana bullet is not so fruity and you’ll be wildly bouncing in the wake of a powerful speed boat as you rodeo your way over the waves.

The bath-tub racing concept is as mentally vexing as the cardboard boat, until you realise with relief that it’s actually done on dry land, but is non-the-less crazy as you race these motorised two man tubs hell for lather against eachother. Oh, yes, the camera is a must for this one!

Now all that stag do lunacy comes from Reading, and we’re back in this top spot for even more mayhem with a quadruple collection of even more bonkers stag do capers.

If you thought that segways were a sedate way to site see or nip through town, then Reading has of course ramped things up a gear for the stag do market. These all terrain, highly manoeuvrable motorised vehicles will have you slaloming off road like you never thought possible. Then, while you’re in the swing, we move you over to the beer kegs. No don’t get excited, the booze comes later into your stag night. This is more racing, but this time in motorised beer kegs. Yes, they’ll put anything on wheels in Reading, especially you!

Keeping your feet back on terra firma is the next big challenge, while you hilariously sumo wrestle in a padded up suit against your weeble of a mate as you try to bounce each other out of the ring.

Then take on a bit of the old table-footie, but don’t forget this is Reading. Yes, by some miracle, someone has found a way to make it life-sized and Velcro you and your mates as the players to a bar (Yes, yes, you’ll be doing the same in the pub later), so you have to work in chaotic unison to score the goals.

Now what does all this say about Reading we wonder - probably that it’s the ideal destination for an off the wall stag night.