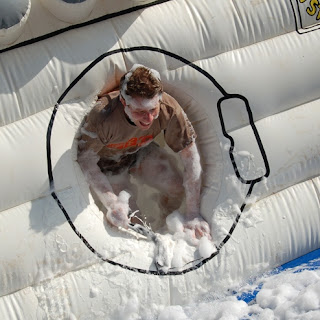 It’s a knockout in the 70’s and 80’s was a huge TV hit which even grabbed the attention of the Royal Family, creating a couple of spin off TV shows called It’s a Royal Knockout.

So what the heck has this got to do with my stag do?

Alright keep your knickers on I'm just about to tell you! If you need a bizarrely brilliant stag activity which will involve the whole of the stag group, It’s a knockout is the perfect choice.

On Saturdays throughout the summer in Bristol, Bournemouth, London and Nottingham, hen and stag parties congregate to compete against each other.

Foam, inflatables, water and loads of laughing, don’t take it too seriously as you will only look a right ninny.

There’s a compare to keep you up to date with scores and all the costumes are included, you just need to wear clothing and trainers you don’t mind getting wet. 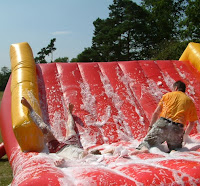 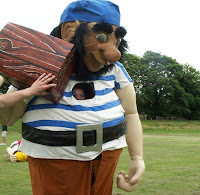 So is this a kind of school sports day for adults?

Yes possibly, except there will be a lot less swearing and spitting.

In all seriousness It’s a knockout is a totally unique stag activity and embraces the fun factor of loosing your inhibitions and having a right laugh with your mates. 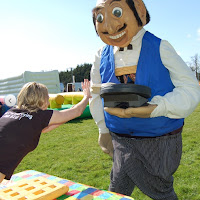 Slippery Summit
Climb an inflatable mountain with the aid of a rope, competing against the other team, it’s not as easy as it sounds, especially when you have a load of soap, water and foam added into the mix.

Wacky Waiters
One of your team members will be dressed as a giant waiter, the rest of the team need to fill his tray with food using giant knives and forks before he sets off to his customers table, it’s back to the kitchen if the food drops on the floor.

Penguin Pursuit
Another fantastic fancy dressed It’s a knockout activity which involves eliminating the penguin in front by catching them up, the winner will go into the final in a sumo style, penguin off!

So for a growing popular hen and stag do alike activity choose it’s a knockout.

You can find the It's a knockout details on our website here.

However, if you prefer; stag dos with It's a knockout included.

It's a knockout Stag Do Ideas
Reactions:

BUBBLE FOOTBALL If ever there was an activity which has been specifically designed for a stag do, bubble football is that very activity.

It's a game of footballIt's a game if football where fouling is the main priorityNo one will get hurt because you're wrapped in a bubble or Zorb suitIt's a group activity, so no one will be left out


WHERE CAN YOU PLAY ZORB FOOTBALL? The great thing about Bubble Football is you can practically play it anywhere there's a football pitch or a flat piece of land with goals!

However, most of our popular stag do destinations we use high quality 365 football pitches which also have changing rooms, showers and a bar!

So Bubble football is practically nationwide, we have even organised it for a stag group on Anglesey!
WHAT'S INCLUDED: You can expect an incredible experience from when you arrive at any of our bubble football destinations and most include the following: ZorbsFootballsBibs…
Read more