Stag Do Pranks - The Stitch Up Stories 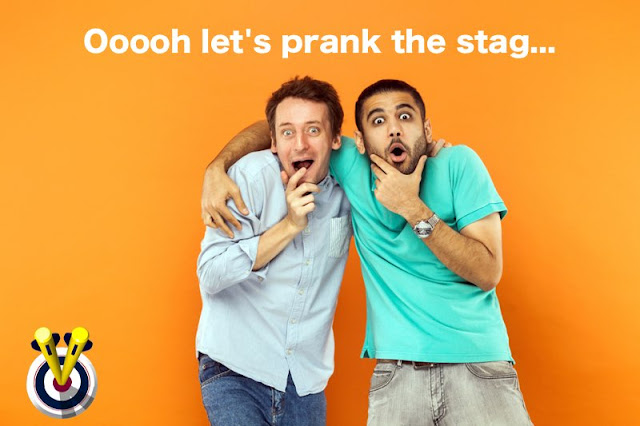 Way back in May 2013 we wrote a post on Top 10 stag do pranks which has been viewed so many times I really do feel sorry for the modern day stag!

And with that in mind here are some belter stories taken from the net which happened and have video evidence to back it up. I have included links and YouTube videos so you can see the carnage for yourself.


A Brutal Chinese Stag Do Ritual

They don't do things by halves in China so if they're going to tie the groom to a lamp post there has to be some more elements to make it a proper prank.


The groom is then released and runs off naked! Check the video out here.

This happened in Shandong province of China and is a ritual called 'Marriage Teasing'.

This poor groom is paraded through the streets on a trailer half naked and covered in baked beans and God knows what else...

This stag do prank was massive and hit the headlines all over the world, even the Bride-to-be was in on it!

Ollie McAninch were driving along a country road near Bath when 16 kidnappers stopped his car (all balaclava'd up) and bundled him into the back of a van, they used smoke grenades and didn't tell him it was a prank for 2 whole hours whilst they drove him deep into Devon.

He was then given a rusty bike and told to ride it for 10 miles to get to his stag do venue.

It gets worst, after this ordeal he was so mentally and physically scarred he contracted shingles and couldn't get near his fiancée (to strangle her obviously) for a whole month almost missing out on the wedding day!

Now that's a prank! You can see the video here.

If your groom doesn't have many brain cells and is as gullible as a three year old, then this prank should be in your arsenal on your stag weekend.

Just simply blindfold him, make sure you make a home-made harness to strap around him once he's blindfolded, find a tall pavement with a barrier and you're there.

Even a tram goes by and he still doesn't click! You can see the video here.

This stag do prank is actually on the person who finds him...

Whatever you do, look after the stag, don't be too cruel and make sure he get's to his big day in one piece and with no visible scarring / shaving.

Best Stag Do Destinations For 2020

2020 is the year to get married, it's got a kind of ring to it (pardon the pun). So you'll need to know the Best Stag Do Destinations for this incredible year.

In no particular order, because let's be honest, everyone is different, here are the best stag destinations for 2020:
1. PRAGUE

The best city in Europe to have your stag weekend, and in my mind Prague is becoming more liberal than Amsterdam, now that's saying something.

Prague is also top of the charts for our Cheapest Stag Destination To Get A Pint In, so not only will your stag party be everything you ever wanted it to be, it'll also be lighter on your pocket.

This capital city is incredibly beautiful and has some awesome stag activities, so altogether a brilliant all rounder.

Bristol makes it easily in to the best stag destinations for 2020 because it's just such an amazing city.